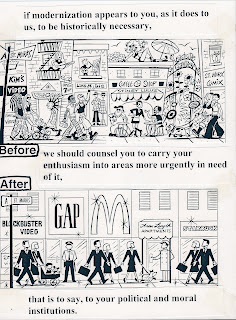 The caption to this illustration, originally published in NOT BORED! #28, December 1997 and reprinted after the "Local Intervention" section of the Anthology, is incorrect. The text wasn't taken from the writings of Henri Lefebvre, but those of the Lettrist International, in particular, the group's October 1955 letter to the editor of the Times concerning the proposed destruction of the Chinese district in London.
Posted by WJB at 6:55 PM No comments:

Email ThisBlogThis!Share to TwitterShare to FacebookShare to Pinterest
Labels: errata

Today, a dozen copies of the NOT BORED! Anthology were mailed out. One went to the designer of the book cover. Another went to the guy who designed the logo used on the cover. (It also appears on this blog: look to the right.) Still another copy went to the person who took the photo of Bill that is reproduced at the end of the book. One copy went to the Labadie Collection at the University of Michigan, to which all previous issues of NOT BORED! have been donated. Two copies went to potential translators in France. Two copies went to well-established American authors who are familiar with the situationists. One copy went to a potential reviewer who is not a well-established author, but active under a pseudonym in the anarchist scene. One copy went to a former professor. And, not last but least, two went out to people who bought copies! THANKS.
Posted by WJB at 6:23 PM No comments:

My dear friend Michael Rosenthal has written a nice notice concerning my recent efforts.
Posted by WJB at 11:16 AM No comments: